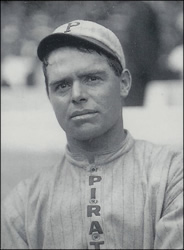 George Gibson was born in London, Ontario on July 22, 1880. He played amateur baseball locally, and semi-professionally before leaving London to play professionally.

Late in 1903 he joined the Buffalo Bisons of the Eastern League, and in 1904 he was sold to Montreal. He started 1905 in Montreal before having his contract purchased by the National League’s Pittsburgh Pirates.

Gibson made his major league debut on July 2, 1905 in Cincinatti. He remained with the Pirates until being claimed on waivers by the New York Giants in the Summer of 1916.

His playing days would end 2 years later; his last game having been played August 20, 1918.

By no means an offensive standout, Gibson was known for his defense and durability. In 1194 games (catching), he posted a 0.977 career fielding percentage, 5214 putouts and 1386 assists.

George Gibson spent 1919 managing the Toronto Maple Leafs of the International League before returning to Pittsburg(h) to manage the Pirates from 1920 to 1922. He then worked as a coach for the Washington Senators (1923), and a coach (and then manager, briefly) of the Chicago Cubs in 1925.

In 1932 he returned for his second stint as the Pirates’ manager.
In June, 1934 he was replaced by Pie Traynor.

George Gibson returned to his farm in London, but remained active in baseball. He spent some time serving as Vice President of the Pirates’ farm club in London, and was heavily involved in local amateur baseball.

George Gibson passed away on January 25, 1967. In 1987, George Gibson was elected, posthumously, into the Canadian Baseball Hall of Fame in St. Mary’s, Ontario.

George Gibson's career statistics can be found over at Baseball-Reference.com.