It has been nearly 120 years since George Gibson was actively playing in the London City League, competing at Tecumseh Park for a the Beck Cup.

Certainly much history has been lost to those passing 12 decades, especially since it was a city league, and surely at the time, nobody was considering that some of their own may go on to star for a Major League baseball team. Technically, I suppose, the MLB as we know it today, didn't even exist then.

But every now and again, something surprising happens.

Back in January of last year, Marty and I were at The University of Western Ontario researching George Gibson and trying to learn about his connections with the Labatt family. Among the archived items we looked at was a magazine about baseball in London.

There was nothing in the magazine that helped us further our research that day, but there was one thing: A picture of a rather old, somewhat ornate, looking baseball trophy: The Beck Cup.

Marty and I immediately recognized it as the trophy awarded annually to the team that won the London City League. More specifically, this trophy was won by George Gibson, and his team, in 1902. We were immediately intrigued.

Credit for the photo was given to Museum London, a museum that, as you can probably imagine, is located in London. The museum isn't open every day, but as luck would have it, it was set to open at noon on this day. We wrapped up our research, set the destination in our GPS, and headed out on a spontaneous little adventure. 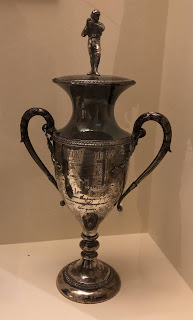 The museum opened just before we arrived. When we got there, we immediately asked about the Beck Cup, and were met with blank stares. We explained what the Beck Cup was. More blank stares. Discouraged, but not yet ready to give up, we wandered the museum's three floors. After passing through exhibits on early fashion, and another on cutting hair, we walked through a room of paintings. Slowly starting to lose hope, we made our way to the basement of the museum. As we walked down the winding stairs, a glass case, tucked in a corner, very much off the beaten path caught our eye. It contained some early baseball jerseys, and a few team photos.

Our pace down the stairs picked up, and as we arrived in front of the case, there it was: The Beck Cup!

To think that some 117 years earlier, George Gibson and his teammates raised this trophy in celebration is pretty cool -- there certainly can't be much other memorabilia left from the early days of the London City League.
Posted by Richard at 12:52 PM