While working on our book, Marty and I were able to make contact with some of George Gibson's family. Last summer, one of George's great nieces hosted an event that was attended by George's 90-year-old Granddaughter, and her four daughters, all of whom traveled from various points in the United States, to Southern Ontario. This experience was easily one of the highlights of this whole book experience, to be honest. The day started with a baseball game at London's historic Labatt Park -- that saw George's granddaughter, four great granddaughters, and great niece, lead a sell-out crowd in the singing of Take Me Out to the Ballgame, followed by a small gathering for dinner, drinks, and great conversation.

What was particularly cool about the experience, was how excited they were about the fact that we were writing a book about George, and, quite honestly, how welcoming they were to my wife, and son, who joined in on the festivities. It was fun to get to know all of them, besides the baseball, and of course, to be able to talk baseball as well.

One small detail that shouldn't get lost in all of this, is that George's Granddaughter is also the daughter of former big-leaguer Bill Warwick. Bill's career was brief, but he did play for the 1926 Cardinals -- the winners of the 1926 World Series. I always knew that George's daughters married a ball player, but what occurred to me while talking to some of George's great grand daughters, was this: There can't be very many people in the world who can claim that their grand father and their great grand father played in the major leagues, and won the world series.

That thought has stuck with me ever since. I haven't dug too deep to see how many "multi-generational" world series winners are out there but it has made me want to find an old vintage card of Bill Warwick. I haven't had much luck, and was near giving up, until I accidentally found this (on Amazon): 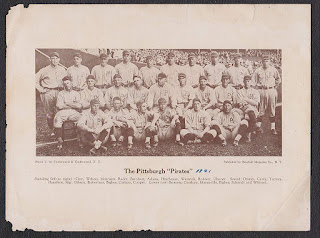 This is a 1921 M114 Baseball Magazines premium of the 1921 Pittsburgh Pirates. Sitting in the centre of the middle row, looking to his right, is George Gibson. Standing eighth from the left, in the back row, is Bill Warwick. Warwick only played 1 game with Pittsburgh in 1921 (according to baseball-reference.com), so it probably wouldn't be too difficult to narrow down when this photo was taken. He then spent a couple of years in the minor leagues, before re-appearing at the major league level with the St. Louis Cardinals in 1925 and 1926.

Whether or not either man knew at the time this photo was taken that one day they'd be family, I have no idea, but seeing this moment captured in time, having now met their extended families, makes this piece that much cooler to me.

Thanks for reading!
Posted by Richard at 2:37 PM 2 comments:

Happy New Year! Clearly it's been a while since there has been any activity here -- but I feel it's been for good reason. Back in the Spring of 2016, Marty and I set out to write a book about George Gibson. Neither of us is a writer, but we were, and are, intrigued by Gibson, and his story, and felt it was one worth researching and sharing. In the late Summer / early Fall of 2018, we pitched the book to McFarland, and they agreed to work with us! We spent the new few months working feverishly to complete the manuscript, locate pictures, secure the rights to use them, get the book edited, and finally submitted. 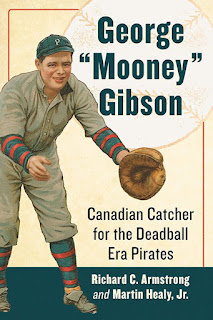 Fast forward to this week, and the book has now also passed through the editing phase at McFarland. We are still a few months away from the book being readily available, but at this point, it has a cover, and is available for pre-order through McFarland or Amazon!

As you would expect, the book focuses on the life of George Gibson. It talks about how he found his way from the sandlots of London, Ontario, to the big stage of the World Series with the Pittsburgh Pirates. The book follows his career as he establishes himself as one of the premier backstops in professional baseball, before retiring as a player and becoming a coach and manager with numerous teams.

In this book you'll see many never seen photos, and learn the story of George Gibson from period accounts, and many stories and anecdotes from George himself!