But one set whose checklist does not contain Gibby is the 1912 T207 Brown Backgrounds. And while you might expect that he'd be in the set because he's in the T205 and T206 set, to expect that is to not fully understand the T207 set. Which isn't to say that anyone really understands the T207 checklist.

The T207 Brown Backgrounds are interesting. After the colourful T205 and T206 issues, the T207 set might be considered bland, by some. They are, well, very brown. This isn't to say they aren't popular, they're nowhere near as popular as T206s to be sure, but there are some die-hard T207 collectors out there. While some argue that the colour palette a little bland, others believe that it's part of the set's charm.

At 200 cards, the T207 set is about the size of the T205 set, but less than half of the size of the T206 set. For some, the checklist lacks the appeal of other sets of the era. The T207 issue is a chance to build an early set without having to buy a Honus Wagner, an Eddie Plank, or 4 Ty Cobb cards. In fact, this set is missing many of the major stars of era. Walter Johnson is probably the key to the set. Tinker and Chance are here, but Evers is missing. So is Mordecai Brown. McGraw and Bresnahan are present, Mathewson is absent. Tris Speaker and Eddie Cicotte got cards, Jake Stahl got left out. The list goes on.

The Pirates representation is particularly interesting.
Based on numbers from baseball-reference.com, here are the Pittsburgh players that played the most at each non-pitching position in 1911:

Here are the position players represented in the T207 set

Between 1911 and 1912, the most active players, by position, not included in this set are:

Wagner missing is probably expected. For whatever reason you believe he was pulled from the T206 set, he was likely also left out of T205, and, had bigger stars been included, would have likely been passed over in T207. Clarke is in both T205 and T206, but didn't actually play any games in 1912 as his career was winding down. I suppose it's possible that American Tobacco knew he wouldn't play (ie. I don't know if anything was announced to that effect), so maybe his absence makes sense.

And in case you didn't scroll back up to check, both Kelly and Simon are in this set.

Here are their cards: Now the fun part -- and the reason for this whole post. I got a text from my buddy Marty yesterday telling me to check out the back of Simon's T207 card.

The back of Simon's card labels him as "George Gibson's efficient understudy". The bio mentions Gibson twice more. Is this the back of a Simon card, or the back of a Gibson card?

Once Marty put this idea in my head, I went and checked out the back of Bill Kelly's T207.
It's not quite as Gibson-oriented, but his name gets dropped here too. Look at this: 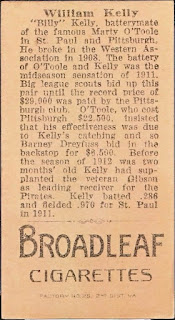 "Before the season of 1912 was two months' old Kelly had supplanted the veteran Gibson as leading receiver for the Pirates."

I've not checked the numbers to see if this is true, but if you look at the numbers for the entire season, nobody supplanted Gibson. He appeared in 95 games, compared to 48 by Billy Kelly, 42 by Mike Simon and 1 by Earl Blackburn. Just like in 1911, Gibson caught more Pirates games than all of Pittsburgh's other catchers combined.


The American Tobacco Company, and more specifically, those that put together the T207 set in 1912, are obviously aware that Gibson is the catcher in Pittsburgh, why didn't they include him in the set?


And secondly, how do I not add these cards to my collection?

Thanks for the post idea, Marty!
Posted by Richard at 8:07 AM