Every now and again (read: late at night when the house is quiet, and I'm too tired to do anything productive, but too stubborn to just admit that it's time to go to bed), I'll end up on eBay or Google searching things that are only peripherally related to Gibson in hopes of finding something unique.

More times than not, I come up very empty. And even if I do, I'm okay with it, because I feel like I've accomplished something by confirming there is positively nothing Gibson out there that I can add to my collection. But every once in a while, I find something.

Two weeks ago was that once in a while.
While searching for just anything and everything Pittsburgh Pirates related, I happened upon an issue of Sporting Life Magazine, and on the cover, was a composite of the 1905 Pittsburgh Pirates. The actual issue was dated November 5, 1905. Since Gibson made his major league debut in 1905, I guess that technically would make it a rookie year issue. It ended up going for nearly $150, far more than it's worth to me, so I didn't get it. I did, however, grab an image of it to share: 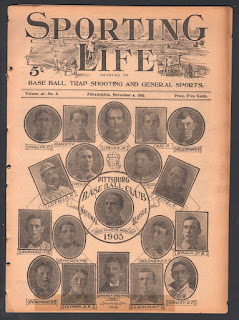 Gibson, in case you can't see him, is located in the second row from the top, third from the left.
The seller claims to be selling thousands of issues of Sporting Life over the next little while (The Hall of Fame in Cooperstown digitized their copies, let the "digitizer" keep them, and now, through Lelands.com, they are selling them all). This was enough to pique my interest. I started looking through their other auctions, and low and behold, if I didn't find this beauty:

The best part? No mention of Gibson anywhere in the auction listing! But, it wasn't a BIN, so I had to wait for about 4 days for the auction to end. When it did, I came out victorious -- with an opening bid of $19.97! And while it's not a 1905, it is from August of 1906, and features *just* Gibby on the cover! The magazine, if I can call it that, is very brittle, so I'm afraid to even try to scan it (took this image from the auction listing), but I'm very excited to have this in my collection. This page is about 11x14, so pretty giant compared to my usual pick-ups, but man is it awesome.

Adding this magazine/newspaper to my collection is probably as close as I'm going to get to ever owning a W600 Gibson. It's the same image, the same issuer, and almost the same issue date. I don't even know what a W600 Gibson would cost if one came up, but I imagine it's north of $1000. So to get this as an alternative, for 1/50th of the price, suffice it to say I'm happy. This is probably as close as I'll get to owning a W600.