If you are ever thinking about dipping your toes into the waters of prewar baseball cards, then one set you should consider is the 1909-11 T206 White Borders set. Now, I should qualify that statement. At just over 500 cards (between about 514-523 depending on how you count some of the variations), it may not sound like a big set if you're in for the long haul, but some of the cards within the set are pretty far out of reach for most collectors. This is, after all, the set that features the famed Honus Wagner card. Even if you tell yourself you don't need that card, then you still have to deal with Eddie Plank.

Then there are the variations -- Magie, Doyle, O'Hara and Demmitt, among others.

The T206 set was released in packs of cigarettes by the American Tobacco Company between 1909 and 1911. Among the brands of tobacco produced by the ATC, 16 were chosen to contain the cards that Burdick would ultimately define as the T-206 set. The brand of cigarette that any given card was distributed with can be determined by simply flipping over the card and looking on the back. There are some really excellent sites on the internet that can you can visit to read about the different brands, and difficulties of collecting each back.

Within the brands, there are also different series. They are defined as the 150 subjects series, the 350 subjects series, the 350-460 subject series and the 460 series. Some of the more common brands (Piedmont, Sweet Caporal, Soveriegn) included the specific series within the branding on the back. This creates additional variety for player collectors or series collectors. For more information about the different series' and brands of T206, you should check out these, two, particularly good sites: www.T206.org and www.T206Resource.com.


As you may have predicted, the rest of this post will talk about doing a player collection from the T206 set.

The image above shows the George Gibson "back run". Included in this back run there are 10 different backs -- Piedmont, Sovereign, Sweet Caporal, El Principe De Gales (EPDG), Hindu and Old Mill (OM). Because Gibson was issued in the 150-350 series, you can also see that some of the backs mention '150 subjects', others mention '350 subjects' and some don't mention a quantity at all.

The nice thing about this grouping is that they range in difficulty (and therefore, price). You can pick up the Piedmont and Sweet Caporal backs with relative ease. The 150s are generally easier than the 350s. The Sovereign is a little more difficult, but not impossible, the EPDG is tricky, but it's out there, and the OM and Hindu, while not down right impossible, will require a bit of luck and timing.

And depending on how strict you are with your back collecting, you don't even have to stop here. There are all kinds of print defects floating around out there (also known as 'freaks'). A few years back, a George Gibson T206 was auctioned off that had a mostly blank back, except it had a few colour passes of Gibson on the back creating a ghost effect.

There is also such thing as a wet sheet transfer, where the back of the card is faintly visible on the front, presumably because sheets of the cards were stacked on top of each other after being printed but while the ink was still wet. You can also find proofs of the cards, cards that still have some of the lines for cutting, and others that have been cut poorly to the point they contain parts of another card. One such example is the T206 Gibson shown here, that has is name printed on the top and the bottom of the card. This leads to the possibility that there's a T206 Gibson out there with no name on it whatsoever. There are other cases still where the top and bottom names don't match (I have never seen a Gibson like this). 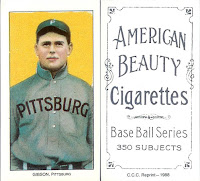 Because the T206 set has been reprinted so many times, you can even collect reprinted versions of a given player. Admittedly, while I doubt most people add these cards to their collection, it is one way to add a few additional brands or unique backs to a T206 collection as the reprints don't always respect what print combinations truly were made available to the public.

When Topps started issuing their own modern-day T206 sets, they included buybacks of actual T206s, so there's that option as well. That I am aware of, there are 4 different Topps "frames" that contain T206s. George Gibson can be found in all four.

If that *still* isn't enough variation for a back collector, you can *still* keep going. The ATC not only issued the T206 "white borders" set, they issued some other sets that are very similar to T206s but do have key differences. As catalogued by Burdick, they are T213 Coupon Cigarettes, T214 Victory Tobacco and T215 Red Cross Tobacco. These three sets share a lot of the same images, allowing the "back run" to continue. If you want to see this kind of collection in action, then I encourage you to check out The Greatest T206 Back Run Ever Assembled.

In closing, I'll simply say this: If you want to further investigate T206s or putting together a T206 back run of your own, then I encourage you to check out these three links below. All three will give you more than enough info to get you going, while providing you with some entertaining reading: