A quick talk about The Conlon Collection 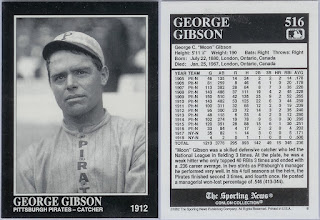 If you're looking to dip your toe into the waters of pre-war baseball cards, but aren't interested in having the era engulf your wallet, then you should check out The Conlon Collection.

The 5-series set was issues from 1991-95, and as the name may suggest, features the work of legendary photog Charles Conlon. The photographs are stunning. The set is numbered 1-1430. The backs are just jammed with information. Check out the two sample Gibson cards (his only two in the set) and you'll see what I mean. Career stats on his player card, and a giant amount of writing on his manager card; one he happens to share the photo with the legendary Honus Wagner.

Because the set was issued during what was probably the peak of the junk wax era, most of it can be had for relatively cheap. A 36-pack wax box (remember those?!) for either 1991 ro 1992 can usually be found for $10 or less. When I built the 1991 set, I got within 2 cards of completing the 330-card issue, which leads me to believe the collation was pretty good. By 1992, Megacards (also involved in the issue, though I don't know the exact relationship) and TSN seems to have figured out that good collation  may not lend itself to increased sales. When I bought the 1992 box, I didn't even crack the 300 mark (again, a 330-card issue). Actually, if memory serves, card # 297 was the last card I needed, and it turned out to be more difficult than I would have expected to find. 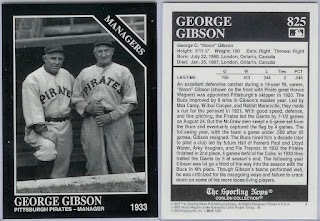 The 1994 set got a little different. I think there *is* a black-bordered version of the set, but mine came in burgundy. No big deal to me, though, the photos were still black-and-white, and incredible. Yet again, the set followed the 330-card format. To be honest, I don't recall what this set cost me, but it was more difficult to track down than the previous three years. It still wasn't outrageous.

If you stick with this set after 1994, that's when things get tough. I believe the story goes that a 330-card set was planned for 1995, but Megacards went bankrupt mid-production. Honestly, I have no idea if that's the truth, but it lends itself well to the scarcity of the issue. The 1995 issue is 1/3 of the size of the previous 4 editions, but at 110-cards, it's not easy to track down. The only way I've seen this set issued is in a single "retail-looking" package. The card borders are forest-green, with a bit of gold. Large lots, or the entire set, will cost you a bit of cake, and even the individual singles will run as much as $3-4 per. If you're lucky, you can grab lots of a few dozen cards at a time for a better price (notice I didn't say "good"!).

And of course, there's more. I've never personally gotten into them, but there are colourized promos you can collect (6 of them, I think), 8x10s of some issues, and on it goes.

Honestly, if you're fan of baseball photography or want to learn about the early game, you should check out this set.
Posted by Richard at 10:00 AM 2 comments: 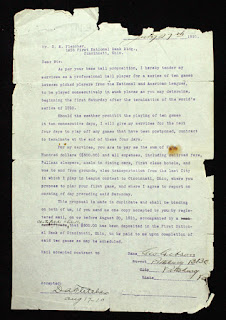 In 2013, The Historic Autograph Company released a set called 'Historic Autographs Originals, 1909-12'. According to the sell sheet [1] the 88-card checklist consists of 68 original 1909-11 American Tobacco T206 cards and 20 original art cards. The cards were distributed by the box, with each box promising the following:
Boxes were available in cases of 5, and only 180 cases were produced (900 boxes). Among the original Tobacco Cards in the set, was Pirates backstop George Gibson. In fact, Gibson was available numbered to 5. Since the set was issued in 2013, 3 of the 5 have been made available at public auctions. Posted below, are those three:

Do these cards exist?

If you swing by the checklist, you'll see that George Gibson has appeared on a lot of baseball cards.

By collecting his cards, you will get a lot of variety. You can spend just about what you wish, and target your collection for your budget, your preferred "type" (ie. tobacco cards, candy cards, etc), or how much you like the 'thrill of the hunt'. In general, the cost of any given Gibson card is relative to the challenge to find that card even for sale!

You can collect more common issues like T206 White Borders, T205 Gold Borders and T202 Hassan Triple Folders, unique issues like P2 Pins, B18 Felts or U1-U4 Matchbooks. If you want something a bit more challenging, but not that difficult, then you might consider D322 Tip Top Bread, E90-2 American Caramel Pirates or maybe one of the various M101-4 issues featuring various backs. If difficult is more your game, then consider going after a 1910 Orange Border, a W600 Sporting Life Cabinet or a Voskamp's Coffee Pirates card.

And if you're really a sucker for punishment, here's a list of cards that are probably best classified as impossible. While all of these cards exist in modern checklists, none of these cards have been confirmed by modern collectors. If you take on the challenge of collecting any of these cards -- and succeed in finding them out there in the wild -- please let us know.